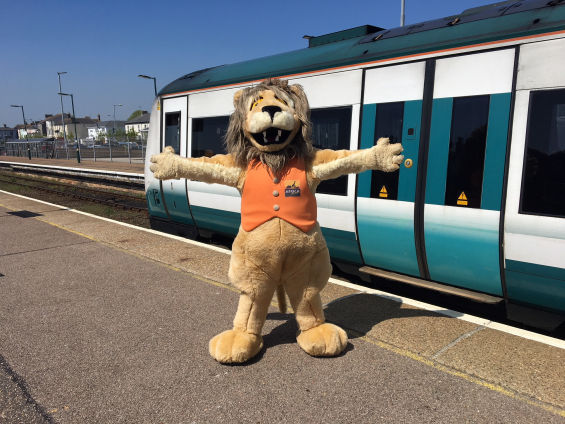 A popular character from our area is off to London next week as part of an initiative to promote rail travel to East Anglia. Reggie the Lion, mascot for Africa Alive! Wildlife Park in Kessingland near Lowestoft will join members from the East Suffolk Lines Community Rail Partnership (CRP) at a national event at London Liverpool Street Station.

Each year ‘Community Rail in the City’ enables Community Rail Partnerships across the UK the opportunity to promote their local area at mainline stations; this year the East Suffolk Lines CRP is to host the London event on Wednesday 16 May; the focus will be on promoting Suffolk’s seaside & market towns, major events and tourist attractions that can all be reached by rail.

With the East Suffolk Lines serving routes from Ipswich to both Lowestoft & Felixstowe, a special guide featuring destinations along the lines will be distributed at Liverpool Street Station after a successful event last year which saw over 15,000 given away in just one day.

The Community Rail Partnerships in Norfolk will also participate to promote destinations and activities along the Bittern & Wherry Lines between Norwich, Sheringham, Great Yarmouth and Lowestoft.

Reggie called in at Lowestoft Station on Tuesday to help promote the Plus Bus ticket add-on which gives rail passengers a discounted return bus fare connecting Lowestoft Station with the rest of the town including Africa Alive! Wildlife Park.

A spokesperson for the East Suffolk Lines CRP said; “We are delighted that Reggie and his colleagues from Africa Alive! will be joining us in London as we promote some of our area’s best attractions and tourist destinations. Around 200,000 people pass through Liverpool Street Station every day providing a great opportunity to showcase East Suffolk and visiting by rail. We are particularly grateful to Greater Anglia and Network Rail for their support in the organising of our event.”