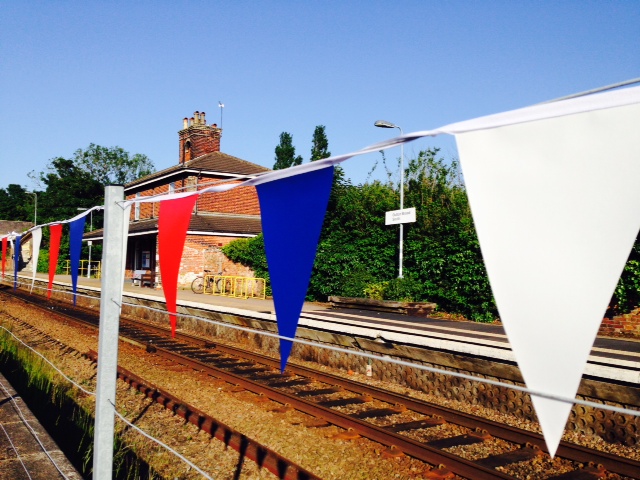 This Saturday 11th June there are special station events taking place to mark the 90th Birthday of HM Queen Elizabeth II with the summer months also providing an opportunity to celebrate the 50th anniversary of the East Suffolk Line escaping closure, as recommended in the now notorious Beeching Report.

Strike up the Band at Lowestoft, Beccles, and Halesworth

All this week volunteers have been busy decorating several stations along the line with red, white & blue bunting and the East Suffolk Lines Community Rail Partnership (ESLCRP) has lined up a special musical treat for passengers and station visitors at Lowestoft, Beccles and Halesworth this Saturday as members from the Southwold & Reydon Corps of Drums play three short concerts, one at each of the three stations.

The fun starts at Beccles Station from midday as the newly opened Station Café and community space opens its doors to the public, with music from the band between 12 & 12.15. Beccles Station has also teamed up with Norfolk based Duchess Afternoon Teas who will be exhibiting their fine china and speciality tea with a chance for the public to see inside the newly restored station building, for many, the first time in over fifty years. At 12.45 Lowestoft Station is next to host the band as the town’s new Mayor, Cllr Nick Webb joins members from the CRP and Station staff to distribute free birthday cake to passengers until 1pm. 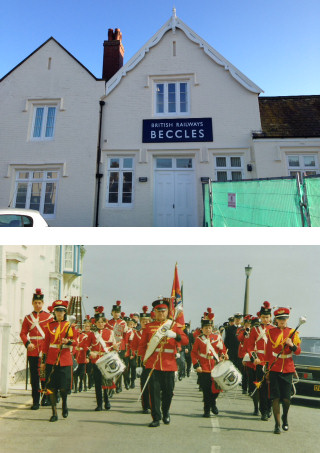 At Halesworth the fun commences at 1pm as the town’s station adopters host a special Tea Party in celebration of the Queen’s 90th Birthday with free tea and cake available. Halesworth Museum, located inside the former Station building will also extend its opening hours until 4pm, presenting an opportunity to discover more about the town and the railway’s history with the band making its final appearance at 1.40.

Later in the day celebratory cakes will be distributed to passengers onboard some train services and at other stations along the line including Woodbridge.

This Summer, the East Suffolk Line, which connects several communities as it runs through some of the county’s most beautiful scenery, marks fifty years since it was saved from closure as recommended in the Beeching Report. Following a hard fought local campaign spearheaded by the East Suffolk Travellers Association (ESTA), the line was reprieved in 1966. In 2015 train operator Abellio Greater Anglia named a train ESTA 1965 -2015 marking fifty years since the campaign group was formed. More recently, the East Suffolk Line has seen a phenomenal 99% increase in passenger use following the installation of a Mon-Sat hourly service. Extra trains have also been added on Sundays to help cope with demand.

Further down the line a major project is now underway at Wickham Market to convert the station buildings into community use and with the help of grant aid obtained via the East Suffolk Lines Community Rail Partnership, to restore the original platform canopy.

This Summer the ESLCRP will be sponsoring a free rail-bus link from the line to the FolkEast Festival at Glemham Hall. In May the CRP published a brand new edition of its hugely popular walks guide featuring over 70 miles of walking routes linking with stations in the East of the county. The Community Rail Partnership is also supporting the forthcoming Lowestoft Station Arches art project, due for completion later this Summer.