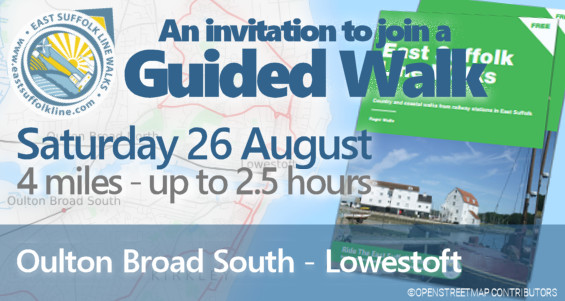 The East Suffolk Lines Community Rail Partnership is hosting another free guided railway walk on Saturday 26 August providing the opportunity to discover some of the industrial, maritime and wartime heritage of Lowestoft.

Starting from Oulton Broad South Railway Station at 10.45, the route runs through Oulton Broad and under the railway swing bridge before heading through current boat building areas and along the north bank of Lake Lothing. The walk then goes and across the site of the original Brooke Marine shipyard before crossing the railway near East Suffolk Line Junction into Normanston Park. The ramble will then follow the route of the former Lowestoft to Great Yarmouth line railway cutting to near the site of the former Lowestoft North Station. The walk then heads to the Royal Naval Patrol Service Memorial in Belle Vue Park and then towards Lowestoft Station via the Lighthouse, Sparrow’s Nest Gardens and Ness Point – the eastern most point in the British Isles. The walk is four miles and will take between two and two-and-a-half hours.

Those taking part will also be able to discover more of the town’s railway heritage as the walk is being led by Trevor Garrod. Trevor is Chairman of the East Suffolk Travellers Association (ESTA). The organisation celebrated its fiftieth anniversary in 2015, having originally been formed to campaign against the closure of the East Suffolk Line as part of the Beeching Report in the 1960s. Having successfully fought to save the line, ESTA has continued to promote and campaign on behalf of those using public transport ever since.

The walk from Oulton Broad South to Lowestoft is known as The Easterling and named after the holiday express services which once traversed part of the route.

The walk is no. 14 as listed in the latest edition (2016) of the East Suffolk Line Walks booklet. It is also available as a download.