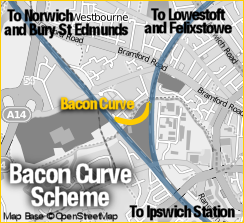 A project which has been proposed for at least a decade has now been fast-tracked thanks to the Olympics. Known as the Bacon Curve for an old Danish bacon factory which used to be situated there, the scheme is a proposed connecting rail line between the Great Eastern Mainline and the East Suffolk Line just north of Hadleigh Road. The link would allow freight trains from the Port of Felixstowe access to the Midlands via the line through Bury St Edmunds. The current route takes trains to London via Stratford, the site of the 2012 Olympics. Bacon Curve will ensure that the two dozen freight trains to and from the Port each day avoid the Olympic site; at the same time it will free up capacity for more passenger services.

The project is now in the design stage and includes a viaduct. The link needs to be long enough so lengthy freight trains don’t cause delays when crossing from the mainline to the East Suffolk Line. The radius of the curve means speeds will be limited to 30mph.

Yet to be decided is whether the link will be single or dual track. A single track would cost £30 million while dual track is estimated to cost £47 millllion. Construction is expected to start next year.