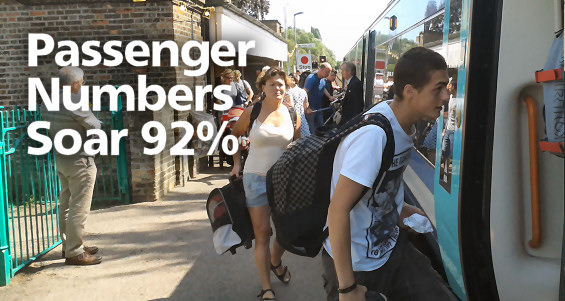 In addition to the major infrastructure projects that enabled the hourly service a programme of improvements was formulated by train operator Abellio Greater Anglia in partnership with the East Suffolk Lines Community Rail Partnership and Suffolk County Council:

£3 million was spent to refurbish the two-car Class 156 fleet of trains. Each set received new toilets, new carpets, dado panels, and seat covers, and the fleet was deep cleaned. Each carriage in the set was also fitted with a new passenger information system which delivers automatic announcements.

A new through-ticketing system was introduced at Halesworth allowing passengers to buy one ticked for use on the train and the direct Anglian Bus service to and from Southwold. The new through ticket was added as a station destination enabling the ticket to be purchased online as well as from ticket machines.

In September 2013 Suffolk County Council, Waveney District Council and Abellio Greater Anglia opened a new bus-rail interchange at Lowestoft station. The scheme involved the reconstruction of the station forecourt to provide passengers with sheltered seating and real-time bus information for bus services calling at the station. An new bus lane was built to enabled buses to pick up and drop off passengers at the station without disrupting the flow of street traffic.

Two additional Sunday services (one in each direction) will commence from May 2015; Network rail is installing barriers at several unprotected level crossings this year which will ultimately allow an increase in line speeds, and there are plans for further station improvements.

The East Suffolk Lines Community Rail Partnership is continuing to work closely with Abellio Greater Anglia, the East Suffolk Travellers Association, and Visit Suffolk to encourage even more people to consider taking the train. Jonathan Denby, Head of Corporate Affairs at Abellio Greater Anglia said: “We’re delighted to see that the hourly service along the whole East Suffolk route is encouraging more and more people to take the train. The major increase in passenger numbers over the last four years shows clearly that an upgraded, more frequent train service is a real alternative to the car. As well as connecting communities along the line, making it easier for commuting and shopping trips, the better service makes the area more attractive for tourism and short breaks, supports the local economy and provides greater access to education and employment. By working together with partners who share an interest in the success of the East Suffolk line, we are helping to create an exciting new phase in the history of the line, with a much more convenient service, good value fares and better customer facilities. We’re committed to making the Ipswich to Lowestoft route an even greater success and an even more valuable asset to the communities it serves in East Suffolk.”