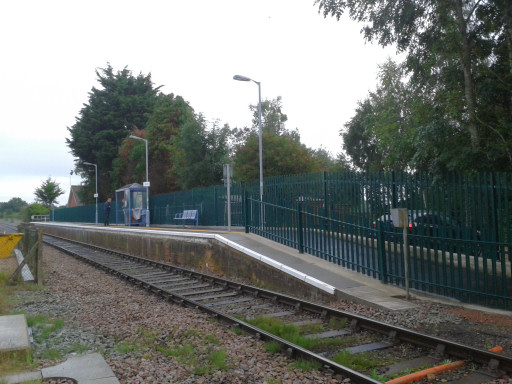 Passengers who use Brampton will notice some big changes at the station. For nine days in August the station was completely closed to allow the work to be done.

When it was realised that the hump would no longer be a long term solution Abellio Greater Anglia drew up plans to completely upgrade the station’s facilites. During the week of 08/08 – 16/08 the station was closed to passengers and crews got to work. Whilst trains passed through at low speed a crew of 10 removed the platform surface and dug out the fill material underneath. Some of the work was even done overnight to shorten the closure. New fill was placed inside the platform walls and compacted. New copers (the slabs at the edge of the platform) were installed and tactiles (those bumpy yellow tiles) were placed alongside. New tarmac was laid down but not before new conduit was run to carry electrics for lighting. The entrance ramp was re-contoured, brand new green fencing erected, and a new gate put in place.

Brampton in rural Suffolk is the smallest station on the Ipswich – Lowestoft line and is operated by Abellio Greater Anglia. Situated between Beccles and Halesworth the station became a request stop following the introduction of the hourly service in December 2012. Passengers on board the train are asked by the guard if they wish to alight at Brampton. At the station passengers wishing to join the train are instructed to hold out their hand to alert the driver. When there are no passengers for Brampton the train passes through the station at low speed. This helps conserve fuel, and in the case of a late running train heading north, it can help the driver make up some time in order to meet the southbound train at the passing loop at Beccles.