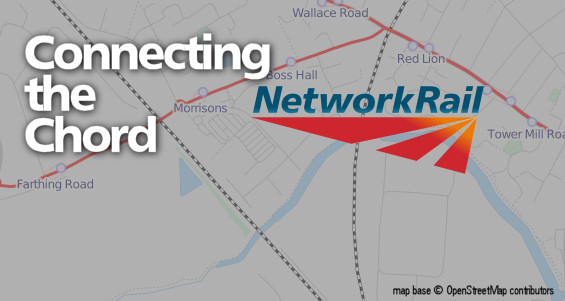 The Ipswich Chord project has been moved a step closer to completion with the installation of a new bridge over Sproughton Road. The bridge was lowered into place next to the Great Eastern Mainline as part of a new .75 mile section of track that will connect with the East Suffolk Line. A similar bridge is in place on the eastern side of the project over the River Gipping.

The new chord will give freight traffic using the Port of Felixstowe a direct route to the Midlands. At present freight traffic going cross country must travel into Ipswich Goods yard; the manoeuver can cause traffic problems in and around Ipswich station. The new chord allows trains to avoid the yard and also free up capacity on the line south of Ipswich effectively serving as a London bypass.

“The work we are doing at Ipswich, together with the other enhancements along the cross-country route between Felixstowe
and Nuneaton in the West Midlands, is a key part of our plans to take more freight off roads and onto rail. This project will help to take up to 750,000 lorry journeys off the road every year by 2030, reducing traffic congestion and carbon emissions as well as improving road safety” said Richard Schofield, Network Rail route managing director.

The project, which includes four new bridges, construction of two new embankments and a retaining wall, is scheduled for completion in April 2014.