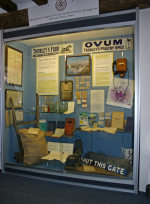 1st June 1859 marks the day the Halesworth, Beccles and Haddiscoe Railway became the East Suffolk Line, opening from Ipswich to Yarmouth, and Beccles to Lowestoft.

To celebrate 150 years a new exhibition is now on display at the Beccles and District Museum . It includes timetables, photographs, lineside items such as lamps and signs, the familiar blue British Railways designed enamel sign that once adorned Beccles Station and a GER teapot unearthed from a dyke at Barnby. The exhibit runs through August.

On 6th and 7th June the museum will hold a Railwaymen’s Weekend. Extra displays will be on exhibit, and anyone who worked on the East Suffolk Line is invited to reminisce, along with enthusiasts and all who have travelled the line.