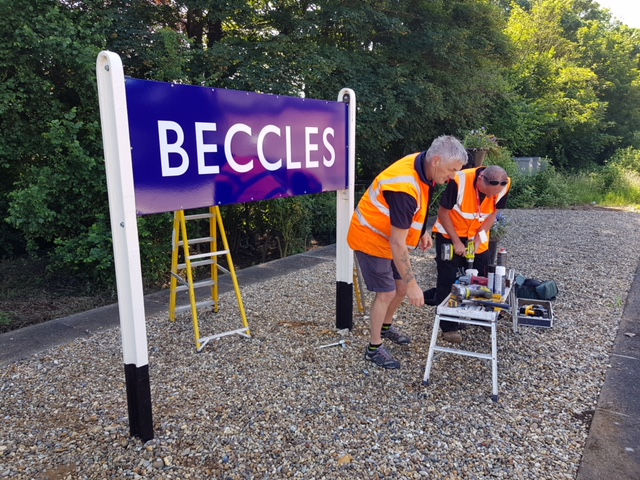 A new heritage sign has been installed at Beccles Railway Station invoking memories of the site’s long and important history.

The sign is set on the Ipswich-bound platform and mounted on a set of original sign posts discovered in undergrowth behind one of the platforms. The design from the late 1940s was recreated in authentic blue and white enamel; similar signs were once a familiar site at stations across the former British Railways Eastern Region.

Complementing the sign are new flower planters donated by Beccles Town Council and cared for by a dedicated team of Station Adopters.

Beccles Station was once a major junction on the East Suffolk Line housing four platforms; services ran to Great Yarmouth Southtown and to Lowestoft Central. Many mainline services from Lowestoft, Yarmouth and London would couple together or separate at Beccles. Beccles was also the eastern terminus of the Waveney Valley Line which ran to the Great Eastern Mainline at Tivetshall via Bungay and Harleston.

Much of the original station fell into disrepair in the 1980s after the remaining line between Lowestoft and Ipswich was rationalised, however since the introduction of a passing loop which brought a second platform back into use and enabled the introduction of hourly services, passenger numbers have significantly increased.

Graham Elliott, chairman of the Community Rail Partnership’s Northern Line Group said “We are delighted to see the installation of a heritage running in board at Beccles, complimenting the many improvements seen at the Station in recent years, providing both a touch of nostalgia and creating a much more attractive gateway to the town.”