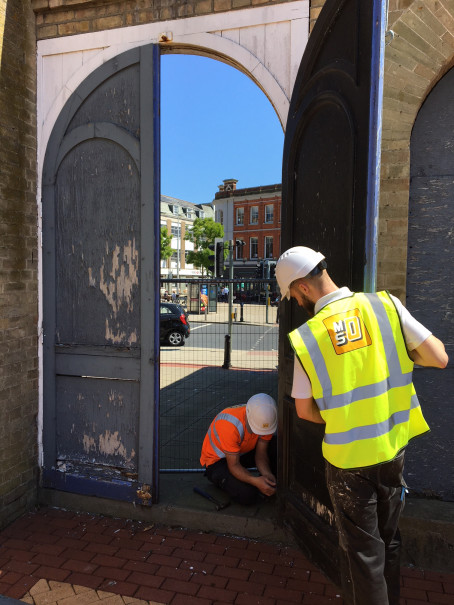 Work to regenerate major parts of Lowestoft Station is continuing; three sets of arched doors at the eastern end of the concourse were removed this week. Once replaced, the three station entrances, closed for more than twenty-five years, will be brought back into regular use significantly improving connections to the town centre.

At over 8ft high, each set of doors is of a different pattern, and although too badly decayed to be restored, each of the three designs will be replicated by specialist Lowestoft based joinery company MS Oakes Ltd. On completion they will be finished in dark green to match the Great Eastern Railway heritage colour scheme which is being introduced across the site.

This latest phase of works has been commissioned by the East Suffolk Lines Community Rail Partnership in conjunction with train operator Greater Anglia. Principal funding for the scheme has come from the Railway Heritage Trust and the Department for Transport’s Designated Community Railway Development Fund.

Work to restore the former station Parcels Office will happen later this year when it will be converted into a new public exhibition space able to host a variety of events and activities. Replica Victorian-era lighting will be installed along the concourse in keeping with the site’s heritage.

Martin Halliday, Community Rail Officer for the East Suffolk Lines Community Rail Partnership said “We are pleased that our plans to regenerate major parts of the station are progressing well with removal of the concourse doors taking place this week. Once completed, the re-opening of the doorways facing Station Square will be a major factor in re-engaging the wider station site with the town centre. Regular visitors to the station will have noticed a number of improvements over the past few months including a heritage painting scheme, refurbishment of the buffer stops, additional parking facilities and the securing and subsequent clearance of land with an enormous amount of unsightly debris removed. There is still much work to be undertaken and the replacement of the concourse doors signifies another important milestone within the project.” 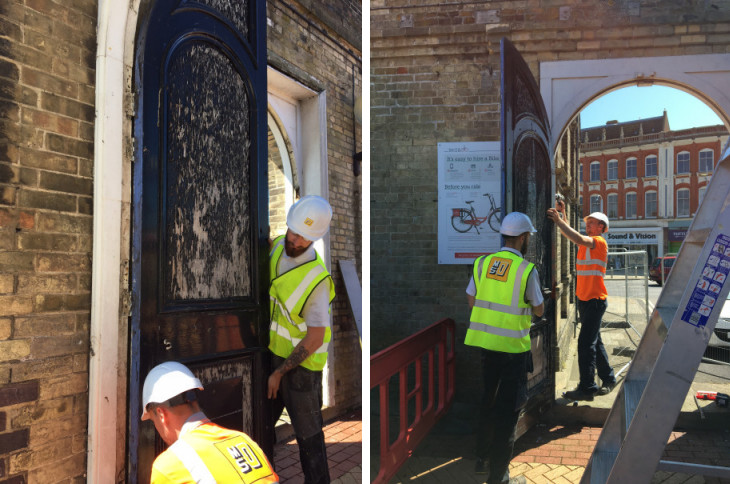 Lowestoft Station dates back to the 1840s and is the most easterly on the entire UK rail network.

Paul Haynes, Partnership Manager at Greater Anglia added “Lowestoft station is on its way to becoming a real community hub thanks to this ambitious project, which is not only restoring and protecting both the fabric and heritage of the building but is making the station much more welcoming as a result.”