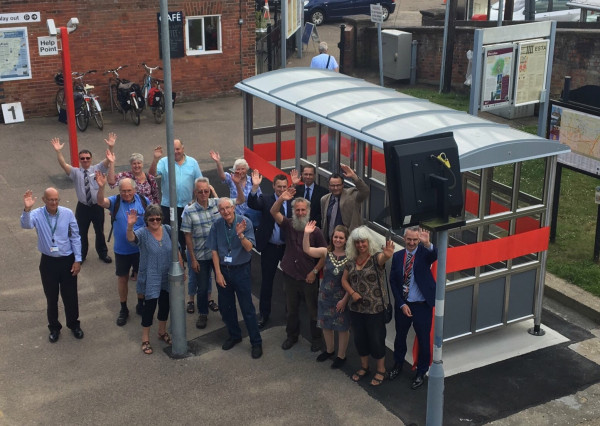 Passengers at Beccles Railway Station are better protected from the elements following the completion of a major project to install a new platform shelter. The East Suffolk Lines Community Rail Partnership secured significant grant funding for the shelter including new drainage and tarmac surface, and new fencing to allow safe access for additional landscaping. Works were carried out in conjunction with train operator Greater Anglia.

Funding for the project came through substantial grants from the Department for Transport Designated Community Rail Development Fund and Suffolk County Council.

Once a major junction, Beccles Station had been in decline up until the late 1990s. Transformation of the station began in 2012 with the installation of a passing loop, reinstatement of a second platform and introduction of an hourly service; passenger numbers have nearly doubled as a result.

Over the past few years Greater Anglia has installed a ticket vending machine, realtime information screens and CCTV. The new shelter is the latest improvement with new seating and LED platform lighting to follow. To mark the line’s 159th anniversary last week, a replica enamel station running in board (name board) was installed on the Ipswich-bound platform. The former station building was restored in 2016 by the Beccles & District Regeneration Charity and now houses community meeting rooms, business units and a popular café.

A dedicated team of volunteer adopters keep the station tidy and tend to an array of flowers in tiered planters donated by Beccles Town Council. They also have plans to reinstate the station rose garden.

The station is more accessible to rural villages along the Norfolk/Suffolk border as a free community bus link from Bungay now calls at the station weekdays following a grant from Norfolk County Council; the service is operated by Beccles Area Community Transport.

Martin Halliday, Community Rail Officer for the East Suffolk Lines Community Rail Partnership said “We are pleased to have secured funding for the new shelter and grateful to the Association of Community Rail Partnerships, Department for Transport and Suffolk County Council for their contributions. “Beccles Station has been completely transformed in recent years and we are additionally grateful to Greater Anglia, Beccles Town Council, Beccles & District Regeneration Charity and especially the dedicated team of volunteer station adopters for their continued efforts and commitment to making Beccles Station such an attractive gateway to the town.”

Brian Barnsley, Deputy chief executive and senior operations manager at ACoRP, said “The partners of the Designated Community Rail Development Fund are delighted to provide funding support for schemes such as the Beccles Railway Station shelter.  “By making stations a safer and more welcoming environment, we hope that the newly installed shelter will encourage more people to use the station and provide inspiration for other stations that are looking to regenerate their sites.”

Graham Elliott, Chair of the Community Rail Partnerships’ Northern Line Group and a member of the volunteer Beccles Station adopter team said “We are thrilled that the new shelter is now in place and that the drainage work has been completed. Passengers will be pleased to shelter away from the rain and the puddles!  “This is another positive step towards achieving our goal of making Beccles Station a welcoming and attractive gateway to the town. The tiered planters, replica sign and new shelter all contribute immensely to the cause.”

Paul Haynes, Greater Anglia’s Community Partnerships Manager, said “We’ve worked closely with the Community Rail Partnership to secure funding for the shelter and additional improvements to provide the community with a much nicer place to wait. The upgrade is great preparation for the new trains that will be serving the station from 2019.”

Aaron Taffera, Chairman of the East Suffolk Lines Community Rail Partnership added “These latest improvements at Beccles make a real difference to passengers using the East Suffolk Line and compliment works undertaken by Greater Anglia and the positive legacy of the previous Beccles Loop scheme, which has seen numbers using both the line and station increase significantly.”