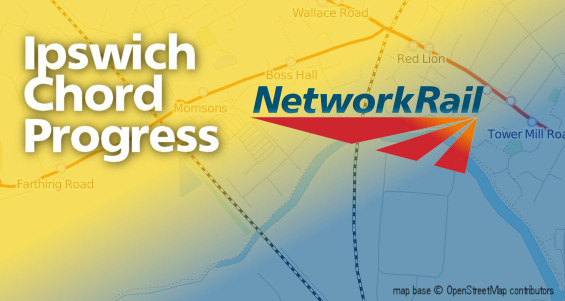 While many of us took time from our jobs to enjoy the holidays workers were busy on the site of a former bacon factory near the Hadleigh Road industrial estate in Ipswich that will soon become Suffolk’s newest section of railway. When complete, the Ipswich Chord (known affectionately as the Bacon Curve) will join the Great Eastern Mainline to the East Suffolk Line with north facing sets of points on each line.

The project, now well underway, involves contructing a curved embankment to carry the two track railway over the River Gipping (twice), and four new bridges which are now in place thanks to works which happened Christmas week. The final bridge is a replacement, known as bridge 404, that spans the River Gipping on the eastern side of the project and carries the East Suffolk Line which is used be trains to Lowestoft and Felixstowe. Winds died down during what was a stormy week to allow engineers to lower the new bridge 404 into place late in the day on Boxing Day. If you’ve wondered why some trains were replaced by buses between Woodbridge and Ipswich, and at times on the entire Felixstowe Line, this is why. 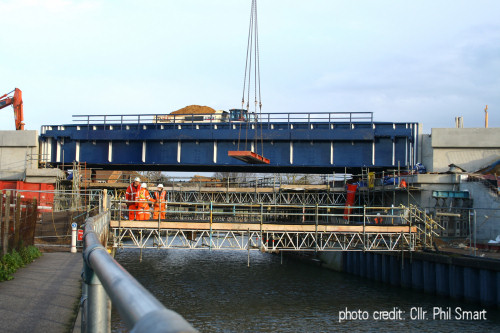 Although the chord is short in length (1415 metres) the multi-million pound project will provide many benefits. It will allow trains from the Port of Felixstowe direct access to the Midlands without having to travel the Great Eastern Mainline to London, or having to complete complex run-round manoeuvers near Ipswich Goods Yard. For rail users it frees up track capacity in the area around Ipswich station where passenger services terminating from Cambridge, Peterborough, Felixstowe, and Lowestoft all intersect with mainline trains between London and Norwich, and freight trains from the port. For motorists it takes 750,000 lorries off the roads in just the next 16 years.

You may already be familiar with the amount of rail freight traffic that travels through Ipswich Station when you hear over the tannoy ‘The next train to arrive on platform 3 does not stop here.’ You’ll still hear that announcement when the project is complete, but not as much.

In addition to the chord work is now getting underway on another project to further free up space at Ipswich. The Freightliner stabling yard next to the station will move north toward East Suffolk Junction in the coming months.

Work on the chord will continue through the winter. Completion is expected sometime in April 2014.