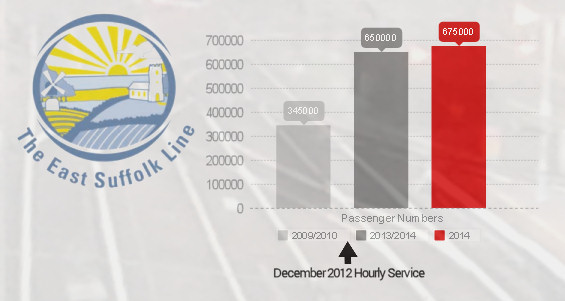 Recent investment in the service included the multi-million pound scheme to install a new signalling system in 2012 along with the installation of the Beccles passing loop allowing for an hourly service. In 2014 Abellio Greater Anglia completed a £3 million refurbishment of the two-carriage Class 156 trains that run many of the services along the route. New ticket machines were introduced at Beccles, Saxmundham, and Woodbridge. At Lowestoft station a major scheme was completed to provide for better parking and easier connections to buses which stop at the rail station. Secure bicycle compounds opened at both Lowestoft and Ipswich stations. In addition Westerfield station was fitted with new LED real-time information screens and a public address system which provides audio announcements like those that can be heard at Ipswich station.

Abellio Greater Anglia’s Area Customer Service Manager, Neil Grabham, said, “By working together with partners who share an interest in the success of the East Suffolk line, we are committed to making the Ipswich to Lowestoft route even more successful and an even more valuable asset to the communities it serves, supporting tourism and the local economy.”