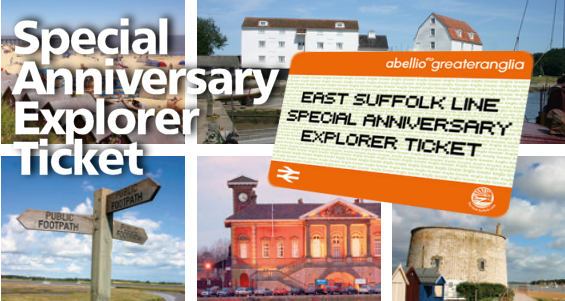 This Summer marks fifty years since the railway which runs between Lowestoft and Ipswich was saved from closure as had been recommended in the notorious Beeching Report. To mark the fiftieth anniversary of the line’s reprieve, the East Suffolk Lines Community Rail Partnership has teamed up with train operator Abellio Greater Anglia to offer a chance to explore the line with a special anniversary ticket.

On Saturday 2 July, passengers can enjoy unlimited travel between Lowestoft and Ipswich for just £8 for adults with accompanying children priced at just £2. The special ticket allows the opportunity to hop on and off trains throughout the day enabling passengers to explore many of the market towns’, heritage and attractions along the route.

The East Suffolk Line runs through the historic market towns of Beccles, Halesworth, Saxmundham and Woodbridge. The station at Melton is a short distance from the Saxon Burial Site at Sutton Hoo and Oulton Broad South Station is perfect for exploring the Carlton Marshes Nature Reserve and the southern gateway to the Broads National Park. At Lowestoft, the station is located at the heart of the shopping centre and just a few minutes walk from the beach. In Ipswich, both the historic waterfront and town centre are not far away. Each market town which the line runs through has a variety of independent shops, museums, galleries and eateries, all close to their respective stations.

The Beeching Report resulted in thousands of miles of railway being closed, leaving entire communities without a rail service. Following a major local campaign, the East Suffolk Line was eventually reprieved in the Summer of 1966 and fifty years later continues to provide a vital transport artery through the East of the county. The more recent introduction of a Monday-Saturday hourly service has seen passenger numbers soar by 99% with additional services now added on Sundays to help cope with demand.

Aaron Taffera, Chairman of the East Suffolk Lines Community Rail Partnership said: “We are delighted to have teamed up with Abellio Greater Anglia to offer this very special anniversary explorer ticket, the line running between Lowestoft and Ipswich has so much for people to see and do and this special ticket will enable them to do just that. For many communities that saw their rail service withdrawn in the 1960s the loss is still keenly felt today, thankfully here in East Suffolk the service was saved and fifty years on, this special explorer ticket is a great way to celebrate such a momentous decision.”

Jonathan Denby, Abellio Greater Anglia’s Head of Corporate Affairs, said: “We’re delighted to join with the East Suffolk Lines Community Rail Partnership (CRP) to mark the 50th anniversary of the East Suffolk Line’s reprieve from closure. Over the intervening years the line has gone from strength to strength, especially in the last 5 years following introduction of an hourly service from Mondays to Saturdays, plus additional Sunday services, resulting in a doubling of passenger numbers. At the same time a proactive partnership between the East Suffolk Lines Community Rail Partnership, local authorities and ourselves as train operator has resulted in a range of station improvements including installation of ticket machines, real time travel information and platform refurbishments. We are continuing to invest in improvements for the route and have recently increased our financial support for the East Suffolk Lines CRP, to ensure the route’s renaissance extends forward over the years ahead. We hope this special anniversary travel offer will encourage people to explore the many historic towns and villages on this attractive, scenic route.”

Availability of the special Anniversary Explorer Ticket is limited and is exclusively available online from Abellio Greater Anglia at http://www.greenrailtravel.co.uk/special/acatalog/East-Suffolk-Line-Celebration.html on a first come, first served basis. Please see online for full terms and conditions.

The government has published safer travel advice for passengers