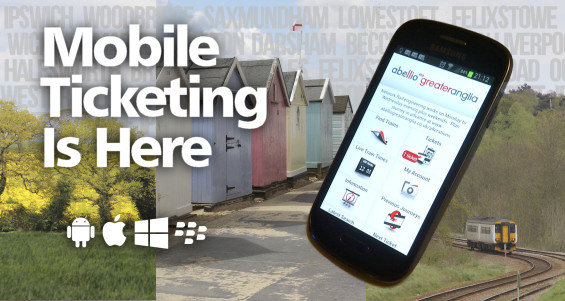 Following a £3 million investment passengers are now able to buy mobile tickets for travel on the East Suffolk Lines, and most tickets on the wider Abellio Greater Anglia network, using a smartphone.

Passengers can buy mobile tickets using either the Abellio Greater Anglia app or Trainline app; up to eight mobile tickets can be purchased at a time, as late as 3 minutes prior to departure. The system works with Android based phones, iPhones, Windows based phones, and Blackberry devices.

The £3 million upgrade that makes it all possible is the installation of barcode readers at stations that have ticket barriers; this allows passengers to quickly move though using their smartphone mobile ticket. A ticket validation database and inspection app has also been deployed to allow for capturing and validating the barcodes.

Better for the Environment