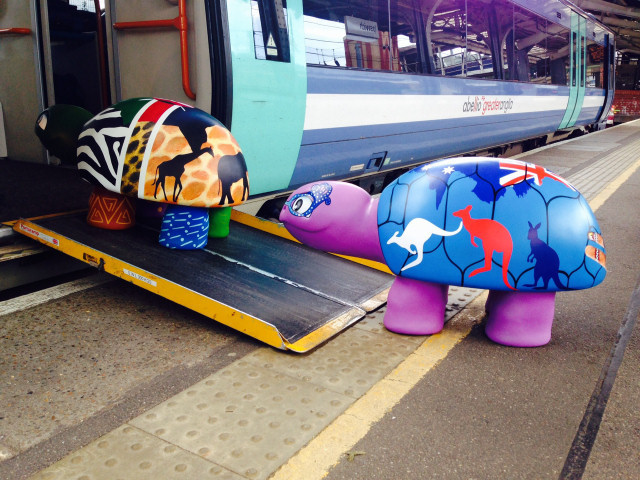 Lowestoft’s Turtle Trail which returns on July 16 as part of the town’s Summer Festival saw the first of its participants arrive by train this week as the East Suffolk Lines Community Rail Partnership invited them to travel on an East Suffolk Line service.

The trail involves finding 18 giant turtles that have been hidden in businesses around the town centre. This year it has an international theme linking to events such as the Olympic Games and European Football Championships; the idea being to identify the country which each turtle represents. As with previous years each correctly completed trail map will be entered into a prize draw for a chance to win a cash prize. In addition, there will be weekly prizes of offer.

This year the first of the turtles arrived into Lowestoft by train on board the Abellio Greater Anglia East Suffolk Line. The Turtles took their journey north from Ipswich on the railway as special guests of the East Suffolk Lines Community Rail Partnership as part of celebrations marking fifty years since the route was reprieved from closure as recommended in the Beeching Report.

With a Mon – Sat hourly service the East Suffolk Line brings people into the very heart of Lowestoft with the first location on the Turtle Trail just minutes away. Other Turtles were due to arrive this week via the town’s river taxi with some also landing on Lowestoft’s award winning South Beach.

Darren Newman BID Manager, Lowestoft Vision said “we are excited to be launching the 2016 Lowestoft Turtle Trail and really looking forward to inviting residents and visitors to turn turtle detective.”

The Turtle Trail will run from 16 July through until September 4 and has kindly been sponsored by several local businesses. Further information on the trail will be announced in the coming weeks or see www.discoverlowestoft.co.uk for updates.