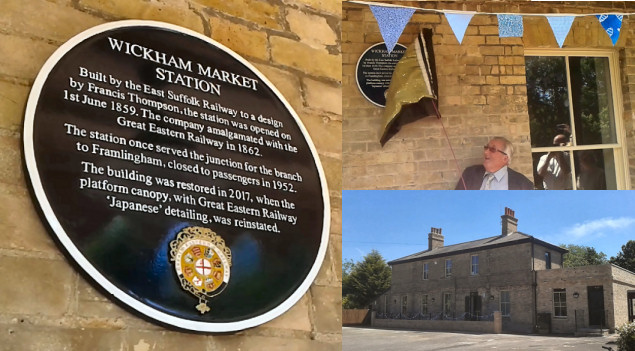 Sir William McAlpine, Chairman of the Railway Heritage Trust, unveiled a plaque on 1st June 2017 to mark the restoration of Wickham Market rail station, 158 years to the day after it opened in 1859.

The vacant station, which at one time was a private home, has been transformed into a community hub and now houses a cafe, waiting room for passengers, touch screens with local history and information, real-time train information, and four rooms for community use; the rooms can be utilised for meetings, running courses, or for training purposes. IT Equipment is built into the desks in one of the rooms. Free Wi-fi is provided throughout the building.

Non-profit organisation Station House Community Connections, a charitable community benefit society, raised the money for the project through a mix of grants and donations.

The East Suffolk Lines Community Rail Partnership helped facilitate a £25,000 grant from ACoRP – The Association of Community Rail Partnerships which, along with funding from the Rail Heritage Trust, was used to rebuild the station canopy as part of the overall scheme. The station had been without a canopy since the mid-1970s when it was removed after falling into disrepair.

A video of the plaque unveiling is on the East Suffolk Lines CRP YouTube page.