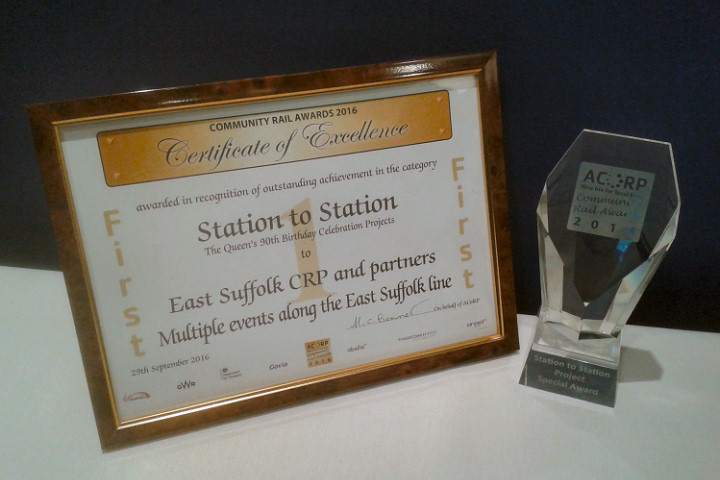 The East Suffolk Lines Community Rail Partnership has been awarded first prize at the 2016 Community Rail Awards for its special double celebration event held to mark the 90th Birthday of HM Queen Elizabeth II and 50th Anniversary of the railway which runs between Ipswich and Lowestoft being reprieved from the Beeching Axe.

In June a series of special celebrations were held including a giant tea party at Halesworth Station, mini concerts by the Southwold & Reydon Corps of Drums band, distribution of hundreds of special birthday cakes and the opening of a new community café in Beccles.

Now their efforts have been recognised with the national Queen’s 90th ‘Station to Station’ Award being presented at a prestigious ceremony attended by Rail Minister, Paul Maynard and senior representatives from within the rail industry.

Having decorated a host of stations in patriotic bunting, the special day commenced with a musical treat from members of the Southwold & Reydon Corps of Drums who, having arrived by train, performed three short concerts at Beccles, Lowestoft and Halesworth. During the event Beccles Station Café and community space opened its doors to the public for the first time and at Lowestoft Station the band played as town Mayor, Nick Webb joined CRP members and Station staff to distribute celebration cakes. In Halesworth platforms were filled to capacity as the town station adopters hosted a giant tea party, with community singing and the U3A Ukulele Band all adding to the fun. Later in the day hundreds of celebratory cakes were distributed to passengers onboard train services and at other stations along the line including Saxmundham,Woodbridge and Ipswich.

The Suffolk event beat strong competition from Community Rail organisations across the UK as well as several stations, including Manchester Piccadilly, to win the coveted award which was presented by Community Rail governing body, ACoRP and sponsored by GWR.

Community Rail Officer for the East Suffolk Lines CRP, Martin Halliday said, “We are thrilled that our events marking the Queen’s 90th Birthday and 50th Anniversary of the East Suffolk Line reprieve have been recognised with such a prestigious national award and wish to extend our thanks to everyone involved in the celebration.”

Paul Oxley, Stakeholder Manager for Abellio Greater Anglia added; “We are delighted the East Suffolk Lines CRP won first prize for the Queen’s 90th Birthday Celebration category at the ACoRP Awards. The team worked tremendously hard to deliver the winning events to stations across the East Suffolk Line and they should all be proud of their achievement.”

The government expects and recommends people wear face coverings in crowded areas such as public transport.