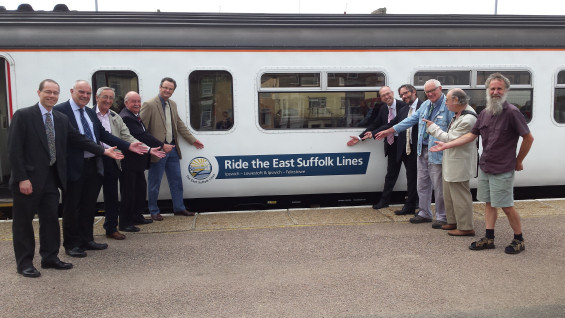 A Greater Anglia train is now promoting the East Suffolk Lines between Ipswich and Lowestoft and Ipswich and Felixstowe, following the application of new promotional branding, as part of the train’s livery.

The special East Suffolk Lines train was officially launched with its new vinyls proudly displayed at photocalls at Ipswich and Lowestoft.

The project is a joint initiative between the East Suffolk Community Rail Partnership (CRP) and Greater Anglia. The CRP and Greater Anglia work with local authorities and other local organisations and groups to encourage greater use of the local railways to Lowestoft and Felixstowe, by building community engagement, improving station facilities, increasing the profile of the service locally and developing other projects which help make the service more convenient and attractive to the local community and potential rail travellers. 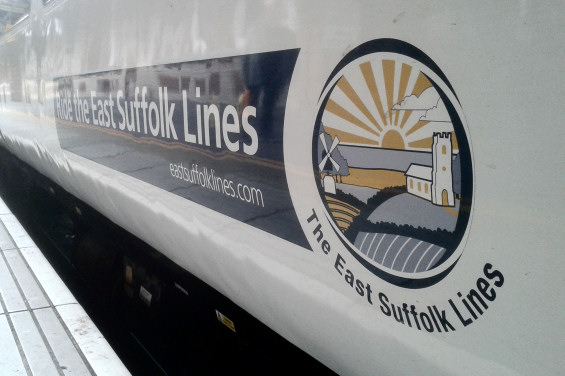 Jonathan Denby, Head of Corporate Affairs for Greater Anglia, said: “This is a great way to promote the East Suffolk Line across the region and encourage travel on these scenic routes. This rail lines starts at Ipswich and weaves through the scenic countryside to Lowestoft, the most easterly town in the country, and to the charming Edwardian seaside town of Felixstowe.”

Aaron Taffera, Chairman of the East Suffolk Lines CRP, said: “The new East Suffolk Lines train will help to raise awareness of the Ipswich to Lowestoft and Ipswich to Felixstowe lines. With the website address highlighted on the train, we hope it will prompt travellers to find out more about the local area and use the train to explore it.”

The East Suffolk Lines train is the final in a series of four Greater Anglia trains to receive a special livery promoting Community Rail lines in East Anglia with similar initiatives to promote the Wherry Lines (Norwich to Lowestoft and Norwich to Great Yarmouth), Bittern Line (Norwich to Sheringham) and Gainsborough (Marks Tey to Sudbury).