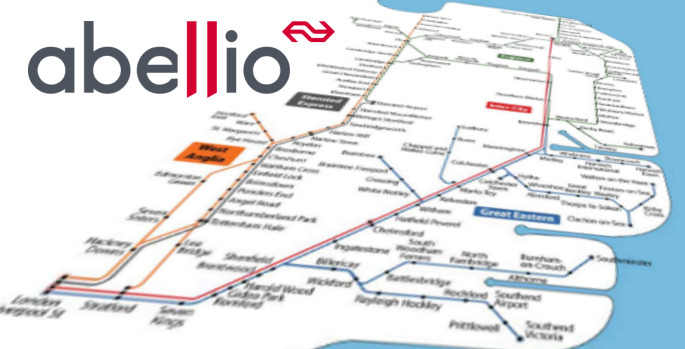 The Department for Transport has selected Abellio to run the new East Anglia rail franchise. The nine-year contract will deliver thousands of more seats using new trains as the entire fleet will be replaced; new British built rolling stock will come from Derby based Bombardier.

Abellio East Anglia will oversee a £1.4 billion investment in rail services which includes the introduction of more than 1,040 new carriages; 90-minute services to run between Norwich and London each weekday with journey times cut by 10% on average across the region, and a £1 billion contract for Derby train manufacturer Bombardier to supply new trains. A £9.79 million investment will be made to upgrade stations.

East Suffolk Lines passengers will see the introduction of four direct services between Lowestoft and London from 2019 using new trains. At least four mainline services will deliver the Norwich-in-90 scheme and two trains will give Ipswich a 60 minute journey time to London. All trains will have plug sockets and free Wi-Fi; free Wi-Fi will also be rolled out at stations.

Norwich – London Intercity services will increase from two to three per hour across the whole day. Norwich will see a direct connection to Stansted Airport through the expansion of the current Norwich – Cambridge service. Connections to the Midlands will double as the two-hourly service between Ipswich and Peterborough will increase to hourly; many of these same services will be extended to serve Colchester. There will be later trains between Norwich and Sheringham, Great Yarmouth, and Lowestoft, and more trains runing a 2-per-hour service between Norwich and Great Yarmouth.

Passengers will also benefit from a new automatic delay – repay scheme, with new ticketing options from October 2017 for part – time users and those who don’t use the rail network on a daily basis, and smart ticketing across the entire network by 2019.

By 2021 there will be more than 32,000 more seats on services arriving at London Liverpool Street in the morning peak, while the new franchise will introduce 1,144 additional weekday services across the network.

Dominic Booth managing director of Abellio UK said: “This is great news not only for Abellio but for the whole of East Anglia. We are pleased to become preferred bidder to deliver a transformation in rail services across the region.

It will enable us to build on the successes of the 2 short East Anglian franchises we have run since 2012, and we commend the DfT in running a transparent and rigorous procurement process.

Our plans will greatly improve our customers’ experience with faster and more reliable journeys on new trains with higher frequencies and reduced journey times, to support the socio-economic well-being of East Anglia, one of the country’s most successful and fastest growing areas.”

Interactive map with improvements for each line.

The new franchise will commence in October and run through 2025.