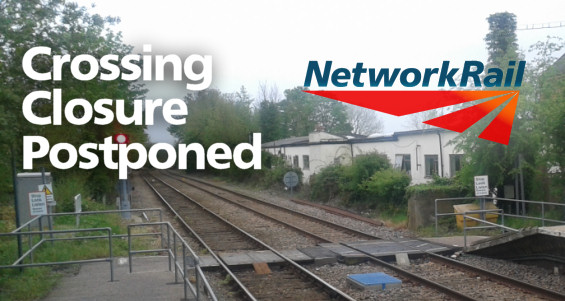 Network Rail has postponed the planned closure of the barrow crossing at Halesworth station. Following a public meeting with residents and further discussions with Suffolk Coastal MP Therese Coffey, Network Rail has decided to install gates with additional safety warnings at the approaches to the crossing, warning cyclists to dismount, and giving instructions to wait until a train has cleared the platform before crossing safely.It’s hoped the unlocked gates provide the opportunity for users to pause and read the additional safety guidance before crossing the twin track railway.

Network Rail says train drivers have reported four near misses since June 2014 where people have attempted to cross while a departing train is moving toward the crossing. Earlier in the year Network Rail carried out a nine day census at the crossing; it says it recorded 206 incidents where people walked behind of or in front of a train at the station. The census also found 32 cyclists crossed without dismounting. Network Rail says the new gates will encourage cyclists to dismount and pass more safely through the crossing. The gates and signage are expected to be installed during the Autmunn.

Network Rail says it will continue to monitor the situation and carry out two more nine-day censuses followign the installation.

Suffolk Coasal MP Therese Coffey MP said “I’m delighted that Network Rail have looked again at their proposed closure of the barrow crossing and will now keep it open with enhanced safety measures. This is a fantastic result for the people of Halesworth who made their views on the closure very clear. Everyone in Halesworth, though, needs to recognise the importance of using this crossing safely, if we want to keep it open in perpetuity.”

Richard Schofield, Network Rail route managing director said “Our aim is to improve safety for those using what is the riskiest barrow crossing in East Anglia. We’ve decided to take an interim step and install additional signage and gates, which we hope will remind everyone how to use the crossing safely. If we see through our censuses this autumn a significant change where people are not taking unnecessary risks, then the crossing can remain open. If people continue to take these risks, then closing the crossing and improving the alternative path will be the best way to improve safety at Halesworth station.”