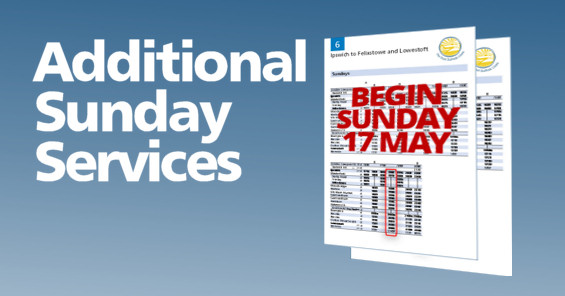 When the new timetable takes effect Sunday 17 May 2015 passengers will benefit from additional Sunday services on both the East Suffolk Line and Felixstowe Line.

More Mainline Sunday Summer services to and from London

Elsewhere across the Abellio Greater Anglia network an extra morning and afternoon service will operate in each direction between Norwich and London: 08.20 and 15.20 Norwich to London, and 11.00 and 18.00 London to Norwich. These extra trains will operate on Sundays until 27 September.

The extra services from part of an agreement between the Department for Transport and Abellio Greater Anglia to improve the frequency of services on Sundays. Andrew Goodrum, Customer Service Director, Abellio Greater Anglia said: “One of the key commitments in our current franchise agreement is to improve the frequency of Sunday services between Norwich and London and also between Norwich and Lowestoft, and Ipswich and Lowestoft. We’re pleased to introduce these new and additional services in our summer timetable from 17 May, offering more frequent journey opportunities for our customers, and helping to provide an economic boost to the region.”