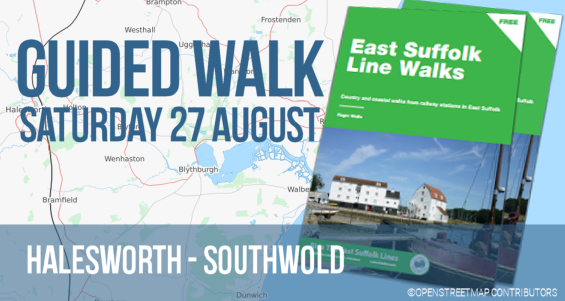 The East Suffolk Lines Community Rail Partnership are to host a special guided walk from Halesworth to Southwold on Saturday August 27, with the ten mile route set to retrace parts of the former Southwold Railway as it takes in the scenic beauty of the Blyth Valley.

Participating in the walk is free of charge and open to the public with the ramble set to follow country footpaths, bridleways and tracks. Starting from Halesworth station at 10.10 following the arrival of Abellio Greater Anglia train services which leave Ipswich at 9.17 and Lowestoft at 9.07.

Woodbridge based walk leader Maureen Colledge said: “We will discover the peaceful and historic countryside of the Blyth valley, taking in Blythburgh village and its magnificent church. Parts of the walk will trace the track bed of the former narrow gauge Southwold Railway, which last ran in 1929. After reaching the coast there will be time for walkers to refresh themselves at any of the resort’s many amenities before returning to Halesworth station using the local bus service.” There is no need to book in advance for the walk and further information is here.

In May the East Suffolk Lines Community Rail Partnership published a fourth edition of East Suffolk Line Walks, containing popular existing and new walking routes and local information connecting two railway lines in the east of the county with a host of towns, villages and areas of special interest. Featuring over seventy miles of walks linking Suffolk railway stations with the county’s coast, countryside, industrial heritage, rivers and broads featured, the latest edition of which several thousand have already been snapped up has proved extremely popular with the Community Rail Partnership now considering a reprint.

The latest edition of East Suffolk Line Walks is free and runs to over 60 pages. A few copies are still available from many outlets across the east of the county and a downloadable version is online at eastsuffolklinewalks.co.uk. While stocks last copies can be obtained by sending an A5 size stamped addressed envelope with a minimum £1.50 (UK mainland) postage to East Suffolk Line Walks, East Suffolk Lines CRP, c/o Lowestoft Central Station, Denmark Road, Lowestoft, Suffolk, NR32 2EG.