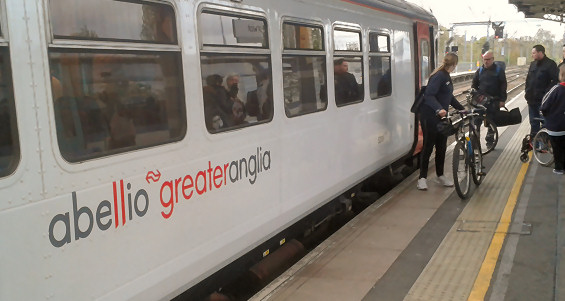 Train operator Abellio Greater Anglia has signed a franchise extension agreement with the Department for Transport which will see the company continue to operate rail services in our region through October 2016. The new contract, which commences from this July, means some £20 million will be spent on improvements in the next 15 months.

The East Suffolk Lines will benefit from an additional Sunday service in each direction between Ipswich and Lowestoft from May 2015. An enhanced “Heavy Clean” programme will be implemented for both trains and stations, and the East Suffolk Lines Community Rail Partnership will see a 20% increase in the funding it receives from Abellio Greater Anglia.

In addition there will be a major refurbishment of InterCity carriages operating between Norwich and London. Passengers will see new carpeting, seat covers, power points and lighting, along with upgraded toilets. This refurbishment will create over 1,600 additional seats by converting first class seating in catering vehicles to standard class.

Cyclists will also benefit with a commitment to install an additional 400 cycles spaces at stations across the network.

New Off Peak services will be introduced between Cambridge and Stansted from this July.

Season ticket holders will be able to claim compensation on-line.

Jamie Burles, Managing Director at Abellio Greater Anglia, said “We have agreed a very positive new contract with the DfT, which will deliver real improvements for customers across our franchise network. We have taken a deliberately customer and community-focused approach to the development of this new deal, ensuring that there are tangible benefits for passengers and stakeholders, despite it only covering 27 months, as well as paving the way for further upgrades as part of the longer franchise that will follow from October 2016.”