Suffolk and Norfolk’s Community Rail Partnerships (CRPs) will fly the flag for local railways at a special transport festival, ‘Lowestoft Motion’, which is being held in the town centre Saturday 28 June.

The East Suffolk Lines CRP will be represented by the East Suffolk Travellers’ Association (ESTA) stand on London Road North along with the Bittern Line and Wherry Lines Community Rail Partnerships at Stand 21. The CRPs will be promoting rail as an environmentally friendly way to travel, an affordable alternative to the car and a great way to explore the picturesque countryside, towns and villages of Suffolk and Norfolk.

The CRPs work in partnership with the local train operator, Abellio Greater Anglia, to promote local railway lines, make improvements and foster links between the railway and the communities they serve. 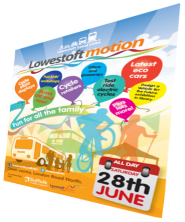 Ted Gadsden, Chair of the Bittern Line Community Rail Partnership (on the line which runs between Norwich and Cromer / Sheringham) said “We’re delighted to bring the Bittern Line to Lowestoft for the day. With Abellio Greater Anglia’s Anglia Plus, Wherry Lines Ranger and Bittern Ranger day tickets, exploring the region by rail is fun, easy and affordable and we hope our presence at Lowestoft Motion will encourage more people to give it a try.”

The Lowestoft Motion transport festival takes place throughout the town centre on Saturday 28th June from 9am until 5pm. The event is free to all and will feature cycle stunt displays, the latest eco cars and electric cycles to test ride, buses old and new to explore, cycle retailers, as well as a host of entertainment and activities for all the family including competitions and quizzes, fun challenges and more.

Lowestoft Motion is being held in partnership with Suffolk County Council and Lowestoft Vision.