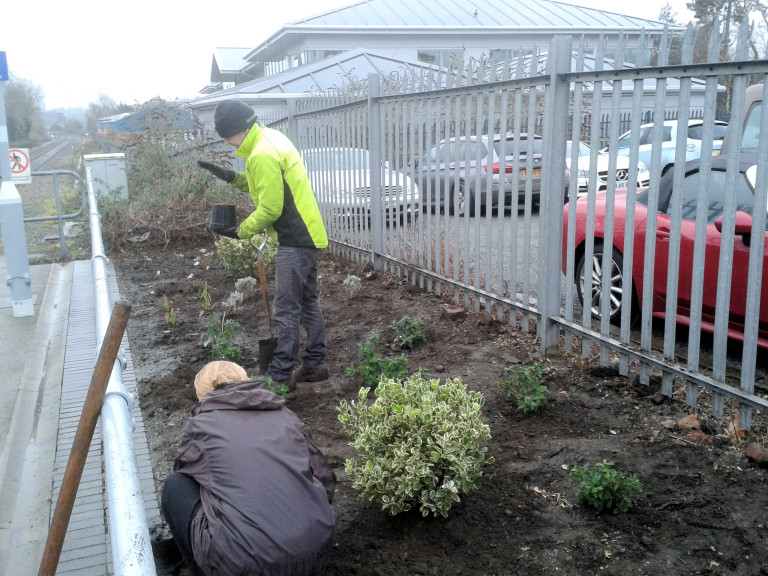 A Community Project to create a new garden and wildlife haven at Melton Railway Station was completed with volunteers from the Community Rail Partnership, Suffolk Coastal District Council and Suffolk Coastal Norse’s Footprints Voluntary Group to plant over 250 new shrubs.

The planting scheme is the culmination of several years work at the station by volunteer station adopter Aaron Taffera in which a significant amount of overgrown foliage has been cut back and removed along with other debris.

Aaron, who is also Chair of the East Suffolk Lines Community Rail Partnership, has been Station Adopter at Melton for the past five years. Aaron said; “I am thrilled that the planting is now underway and I’m looking forward to observing the garden as it evolves and changes over the seasons. I’d particularly like to thank the volunteers that have given up their time to assist in the planting this week and hope that as the plants mature they will provide an attractive year-round welcome to Melton”

Joint funded through the Community Rail Partnership, Suffolk Coastal District Council and the Department for Transport via a grant from the Association of Community Rail Partnerships, the scheme is set to provide an attractive gateway at the station and improve the environment with all species of plant being native to England and many specifically chosen to help sustain Bees and other wildlife.

The planting scheme at Melton was devised with the support of local suppliers who recommended species which can survive with little water and enhance opportunities to support wildlife whilst complimenting surrounding vegetation. During preparations for the works, twelve Toads were carefully re-homed at Riverside Park.

Opened in 1859, Melton Station played an important part in World War 2 as the railhead for RAF Bentwaters. Passenger services were withdrawn from Melton in 1955; decades later and thanks to a successful local campaign the station re-opened to passengers in 1984. Part of the original station buildings now house a popular butchers shop and passenger numbers continue to climb with around 70,000 people using the station last year, up 7.6% on 2015/16.

Melton is served by trains to Lowestoft and Ipswich via the East Suffolk Line, and is situated just over a mile from the National Trust managed Anglo Saxon Burial Site at Sutton Hoo. It is also a popular location for walkers with various routes including the riverside path towards Woodbridge.

Enhancing the station garden is the latest in a number of Community Rail supported initiatives in the East which have most recently included an award-winning restoration at Wickham Market Station. The partnership has also produced a series of publications including a new tourist map and guide and a popular book of railway walks. A major scheme to rejuvenate a substantial part Lowestoft Station is set to be completed in late Spring.