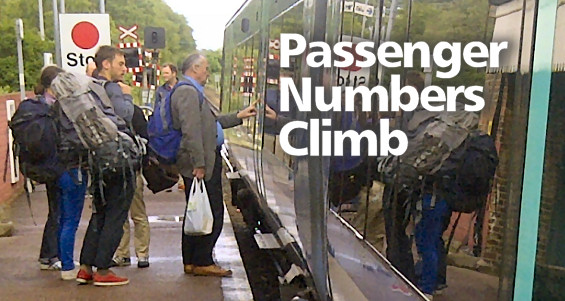 Passenger numbers on the East Suffolk Line (Ipswich – Lowestoft) are up significantly in the past six months compared to the same period a year ago. For the last six months 27,000 additional journeys were made, 270,000 in total versus 243,000 for the same six months a year ago.

The 12% increase (a 60% increase compared to 2009/2010) coincides with several improvements made on the line simultaneously. In December 2012 the new passing loop at Beccles (the Beccles Loop) opened along with a new platform and waiting shelters. The loop allowed for an hourly service along the entire route for the first time in over two decades. At the same Network Rail began operating a brand new £27 million state-of-the-art signalling system. Both improvements have helped reduce delays and drive punctuality to over 90%. In addition the first of nine two-car class 156 trains was refurbished inside and out and put back into service (that number now stands at three of nine). New carpeting was installed on the three-car class 170 trains.

Other improvements followed: Automatic ticket vending machines were installed at Woodbridge, Saxmundham, and Beccles. New car park schemes at Melton and Wickham Market were completed which more than doubled the available spaces, in the case of Melton more than four times as many cars can now be parked at the station. Street lights were also installed at Wickham Market station. Flat panel arrival / departure screens were deployed at Ipswich station. By the end of the survey period rail passengers could book a journey to Southwold: an integrated all-in-one ticket good on both Greater Anglia trains and the Halesworth – Southwold Anglian Bus Service.