Suffolk County Council has begun work on a safety improvement scheme at and around Darsham railway station. During the evening hours of 5 December 2006 an elderly couple had just gotten off the train; they were struck by a car and killed as they were attempting to cross the A12 to get to the car park. While the station and platforms are well lighted, the A12 in that area is only illuminated by reflective paint.

The improvements include a separate pedestrian entrance to the car park, a new pedestrian route on the A12 near the crossing barriers, raised kerbs, and new pavements. The scheme also includes street lighting along the A12 in the vicinity of the station. Work is expected to be complete by the middle of August at a cost of between £35,000 and £45,000. 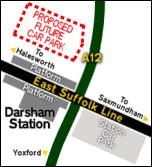 Train operator National Express East Anglia, track and infrastructure owner Network Rail, and Suffolk County Council are looking at a long term solution which would place a new car park on the north side of the Ipswich bound platform. This would allow passengers access to both pl